What is ECC memory?

Error correction code (ECC) is a mechanism used to detect and correct errors in memory data due to environmental interference and physical defects. ECC memory is used in high-reliability applications that cannot tolerate failure due to corrupted data such as medical equipment, aircraft control systems, or bank database servers.

Most memory errors are single (1-bit) errors caused by soft errors (eg. cosmic rays, alpha rays, electromagnetic interference) but some can be due to hardware faults (eg. row hammer fault). Soft errors are more prevalent for systems that operate at higher altitudes, such as commercial aircrafts. It is said that at an altitude of approximately 10km, bit error inducing cosmic rays are 300 times higher.

Such single bit errors can be corrected by ECC memory systems. Multi-bit errors, may also be detected and/or corrected, depending on the number of symbols in error.

Symptoms of memory errors include corruption of data, system crash, and/or security vulnerabilities giving unprivileged code access to the kernel. Memory errors are known to be one of the most common hardware causes of machine crashes in large scale data centers.

How does ECC work?

ECC is implemented by generating and storing an encrypted, parity-like code used to not only identify the bit in error but correct it as well. This implementation-dependent ECC code is generated and stored on writes, and verified on reads.

The ECC verification step, using a parity-check matrix, generates a value called a syndrome. If the syndrome is zero, no error occurred. Otherwise, it is used to index a lookup table called the syndrome table to identifying the bits in error (if correctable), or otherwise determine if the error is uncorrectable.

For example, if the ECC verification step calculates the syndrome to be 111, the above syndrome table can be used to lookup the error vector to be 0000001. The error vector identifies d4 as the bit in error for the 7-bit message.

The sequences for read and write accesses are summarized below. 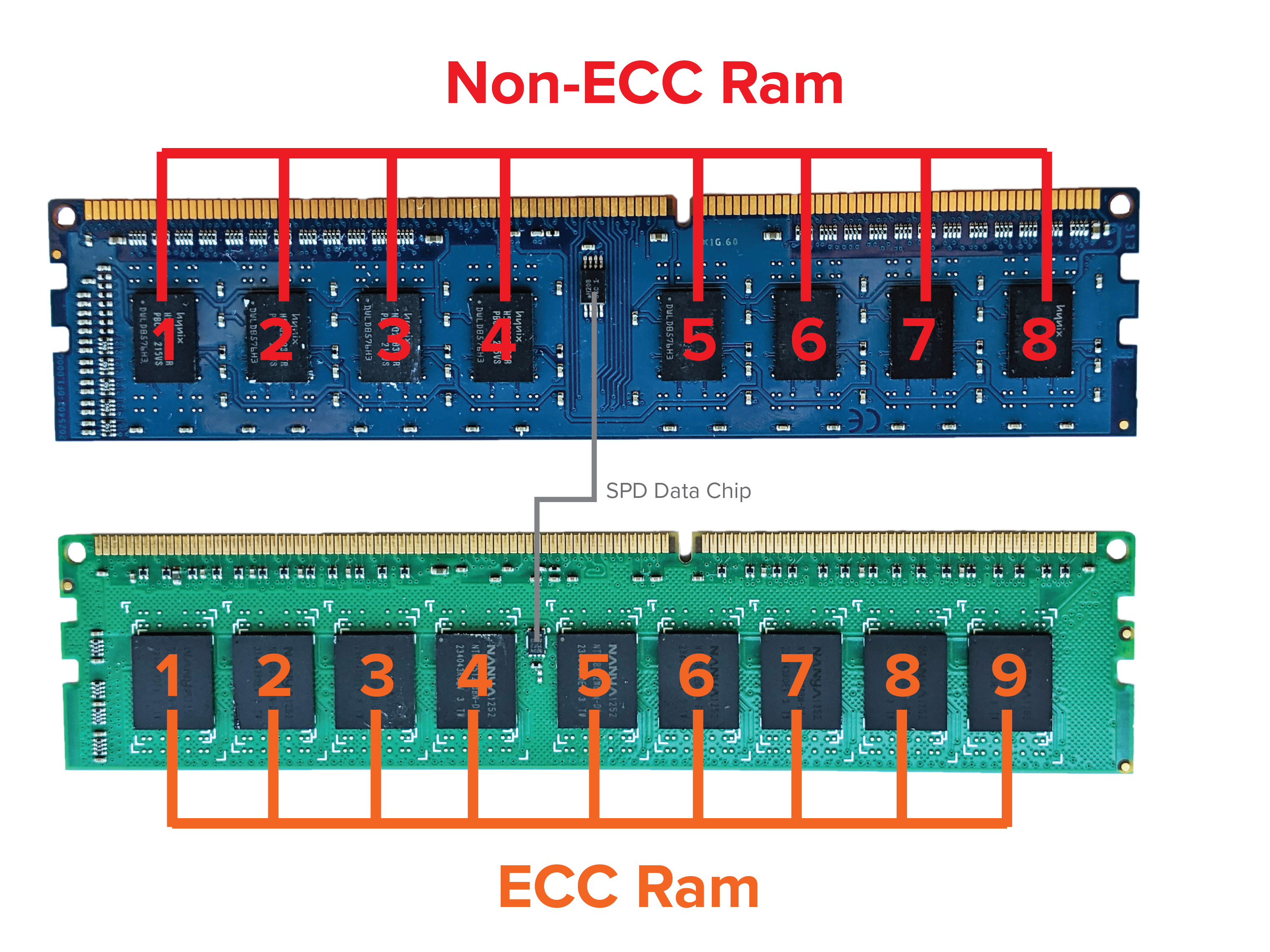 More often than not, ECC RAM is also Registered RAM which places a register between the memory controller and DRAM banks. This reduces the electrical load especially for systems that have a large amount of RAM installed, which is often the case for server-grade machines.

What are the different ECC schemes?

An ECC-enabled memory subsystem may use one or more of the following schemes:

During write operations, the memory controller generates and transmits the ECC code alongside the write data as "side-band" without introducing extra command overhead.

On read operations, the stored ECC code accompanies the read data as "side-band" which is then verified, and if necessary, corrected by the memory controller.

Inline ECC is used for LPDDR memory systems that have stricter hardware constraints. This effectively removes the requirements of extra bits in the memory bus and separate DRAM chips for the ECC code needed for Side-band ECC.

On-die ECC is a new scheme introduced for DDR5 memory which is completely self-contained in the DDR5 memory module.

On-die ECC, unlike the above schemes, does not provide end-to-end protection. The purpose of On-die ECC is to protect the integrity of data stored in the memory cells of DRAM arrays; it does not detect or prevent errors that occur during transmission between the memory controller and the memory module. All ECC detection and correction is performed internally within DRAM memory cells; it is completely invisible to the CPU and memory controller.

To provide full end-to-end protection, On-die ECC would need to be used in conjuction with Side-band ECC.

Link ECC is another new scheme introduced for LPDDR5 memory to augment end-to-end protection for systems with hardware constraints.

Link ECC, by itself, does not provide end-to-end protection; it provides protection for errors that occur during transmission on the channel between the memory controller and the DRAM.

On-die ECC detects and corrects errors in the DRAM cells that may occur during, for example, a DRAM row refresh. Due to increasing error rates as process technology reduces the size of memory cells, on-die ECC sustains the yield of "good" memory cells. On-die ECC is completely invisible to the system. Its implementation, encoding/decoding algorithms, and metadata are all fully contained within the DRAM device and provide no feedback about error detection and/or correction to the rest of the system

Similarily, Link-ECC detects and corrects transmission errors on the LPDDR5 link or channel. Compared to previous generations the likelihood of errors on the DQ line is much higher, due to significant changes in speed and power usage of LPDDR5 RAM. Link-ECC offers protection for speed and power improvements.

In general, there is a trade-off between the higher cost of ECC hardware and slight decrease in performance versus greater system reliability and availability. Depending on the implementation, it is said that enabling ECC may consume additional power and lower memory performance by around 2–3 percent. For home or personal use, the consequence of memory errors may not be significant enough to justify the additional cost.

What system requirements are needed to enable ECC protection?

Due to additional circuitry required for ECC protection, specialized ECC hardware support is required by the CPU chipset, motherboard and DRAM module. This includes the following:

Consult the motherboard and/or CPU documentation for the specific model to verify whether the hardware supports ECC. Use vendor-supplied list of certified ECC RAM, if provided.

Do I need to change BIOS settings?

Most ECC-supported motherboards allow you to configure ECC settings from the BIOS setup. The specific option depends on the motherboard vendor or model such as the following:

An example of such ECC setting is shown in the following screenshot. 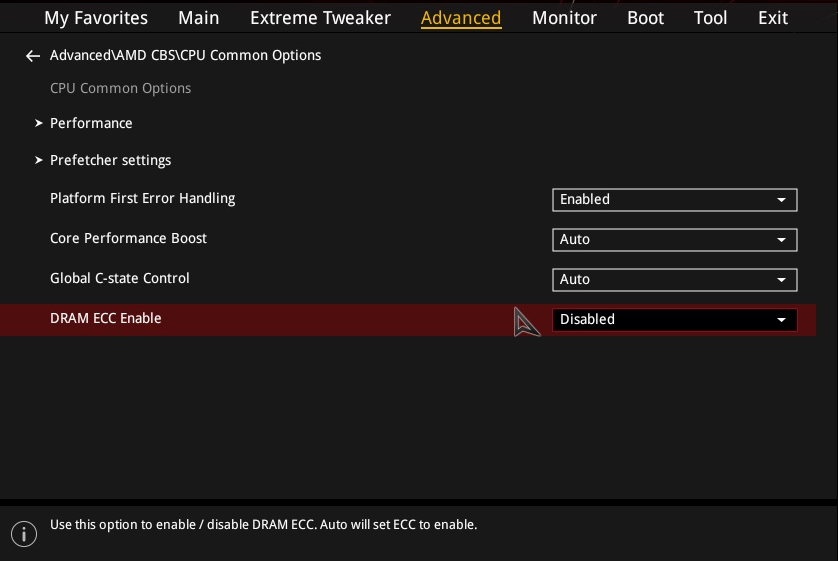 How do I know when ECC errors are detected?

How does MemTest86 report ECC errors?

MemTest86 directly polls ECC errors logged in the chipset/memory controller registers and displays it to the user on-screen. In addition, ECC errors are written to the log and report file.

During testing, MemTest86 may report ECC errors detected by the memory controller if ECC is supported and enabled. This is demonstrated in the following screenshot: 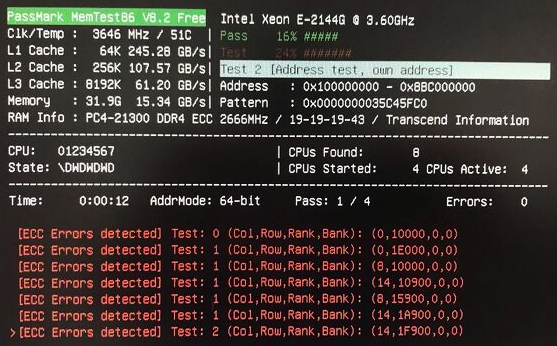 The degree of information available for the detected ECC error depends heavily on the CPU/memory controller chipset. This includes any of the following:

The ECC error was detected in memory address 0x8F32540AC.

The ECC error was detected in the DIMM module located in channel 1, slot 0. No information regarding the memory address that triggered the ECC error is available.

Credits to lunadesign for determining the mapping for Supermicro H12SSL-NT

Due to different memory controller architectures amongst different chipsets, there is no common ECC error framework; specific ECC polling code is required for each chipset. In particular, this would involve polling one or more of the following hardware registers:

Machine Check Architecture (MCA) is an x86-specific mechanism for CPUs to report generic hardware errors to higher-level software (eg. operating system). This allows system software to handle hardware errors in a generic way, without needing to the internal details of chipset. It defines a common set of model-specific registers (MSRs) that deterine the system response when hardware errors are detected. In the case of ECC errors, an exception, Machine Check Exception (MCE), may be generated and the offending address, channel, and/or syndrome may be logged in the MSRs.

Some chipsets may also define a set of Integrated Memory Controller (IMC) PCI registers that record detected ECC errors such as the offending DRAM address (rank, bank, row, column), channel and/or syndrome. These registers are accessed through standard PCI mechanism. Unlike the Machine Check Architecture (MCA), the PCI registers are specific to each chipset and would required a separate chipset-specific implementation.

Some chipsets, such as Intel Atom SoCs, use an internal bus as an indirect method for accessing ECC registers. Such registers are called Sideband registers which adds an additional layer of complexity on top of the previously described PCI registers. Despite the extra layer, similar ECC error details are logged in these registers such as DRAM address (rank, bank, row, column), channel and/or syndrome.

How does Windows report ECC errors?

If ECC is enabled properly in the BIOS, end-users should be able to receive errors via WHEA without needing to configure anything in Windows.

How does Linux report ECC errors?

The Linux kernel supports reporting ECC errors for ECC memory via the EDAC (Error Detection And Correction) driver subsystem. Depending on the Linux distribution, ECC errors may be reported by the following:

rasdaemon can be installed for most Linux distributions using the respective package manager:

What is ECC injection?

ECC injection is a debugging feature introduced in the memory controller to artificially insert memory errors to verify proper system behaviour. This feature is meanted to be used by developers and system integrators, and not meant to be used in production by end-users.

Various ECC injection options are available depending on the vendor (eg. Intel, AMD) and chipset (eg. Xeon, Ryzen, Atom). These options include the following:

Can I use MemTest86 inject ECC errors?

MemTest86 Pro Edition supports ECC injection if the CPU/memory controller chipset supports error injection and the feature is not locked by BIOS. See the current list of chipsets with ECC injection capability supported by MemTest86.

Once ECC injection is enabled in the main menu or configuration file, MemTest86 will attempt to inject single-bit ECC errors at the beginning of each test.

If ECC errors were successfully injected and detected by the system, the user shall see an [ECC Inject] message followed by an [ECC Errors Detected] message.

If [ECC Errors Detected] message does not appear, it is highly likely the ECC injection is locked or disabled by BIOS.

How do I know if my system supports ECC injection?

Some chipsets that support ECC injection have a locking mechanism that once enabled in the BIOS, effectively disables the ECC injection capability. For these cases, a BIOS option may be available to leave the feature unlocked. Otherwise, a custom BIOS is required for unlocking the feature.

Why are ECC errors not being reported on my AMD Ryzen system?

There is a possibility that a BIOS setting, Platform First Error Handling (PFEH), is preventing ECC errors from being reported to MemTest86.

An example of this setting is shown in the following screenshot.

If this setting is enabled, set to disabled and try running MemTest86 again.

Another explanation is the use of out-of-band (OOB) monitoring solutions such as Baseboard Management Controller (BMC) and Intelligent Platform Management Interface (IPMI), which is used in server platforms (eg. Supermicro servers)