Booting v5 or later in UEFI

All MemTest86 images support UEFI boot only. If your system is unable to boot MemTest86, it is most likely that either:

If (2) is true, you will need to go to the BIOS setup and change the necessary settings in order to boot from UEFI. The actual setting varies depending on the vendor but it is typically "Legacy Boot", "CSM" or "Compatibility Support Module", like the following screenshot for an ASUS system 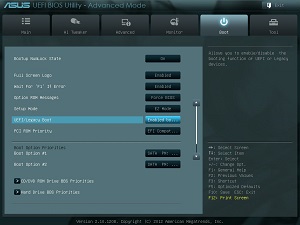