On the client machine, the UEFI BIOS must support booting from the network. In the BIOS setup, ensure that the "UEFI Network Stack" and "IPv4 PXE Support' features are enabled, similar to the screenshot below. 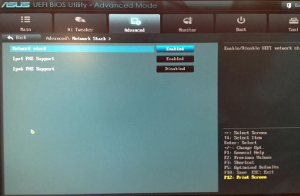 The configuration file (mt86.cfg) is supported in PXE boot and can be used to configure and customize MemTest86. Likewise, report files are supported and can be uploaded to the PXE/TFTP server. Currently, logging is not supported when booting via network.

There is a known issue with using the iPXE open source network boot firmware to chainload the MemTest86 UEFI image. Because iPXE does not support TFTP uploads, report files cannot be saved to the TFTP server. However, the mt86.cfg configuration file can still be downloaded from the TFTP server.